The Houston Chronicle reports that Mark White, the only surviving former Democratic Governor of Texas, has rethought some of his positions on the death penalty. Those who watched the recent documentary on Ann Richards on HBO here in the last few days will surely remember White’s infamous commercial on capital punishment. He walked by gigantic portraits of the men put to death during his tenure, openly bragging about being responsible for their executions. The rhetoric was disturbing anyways, but especially so for a Democratic primary, which the ad aired during.

Speaking some 24 years later, White says the ad was “in poor taste” and regrets it, but he more importantly called for a general overhaul of death penalty mechanisms throughout the State. His impetus on this issue has been the botched execution in Oklahoma, where the state obtained a secret batch of pentobarbital from a compounding pharmacy, much like Texas does for their executions. In Oklahoma, the result was a condemned man who suffered a terribly cruel and unusual punishment. Fortunately, in Texas, no much such has occurred…yet. While Oklahoma then promptly ordered a complete review of the death penalty, Texas has not done so.

END_OF_DOCUMENT_TOKEN_TO_BE_REPLACED 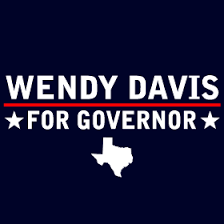 But we all knew this. The New York Times, among other locations, reports that “sources close to Wendy Davis” have leaked information confirming that she will, in fact, run for Governor of Texas in 2014.

A few more details have been unearthed as well about Davis’ future candidacy. She will make the big announcement, as I had partially predicted, in her hometown of Fort Worth. That would also be where the future campaign will be based. This is some very good new for her part. The meticulously astute might remember one of my first posts on this blog, wherein I roundly criticized Paul Sadler’s statewide campaign for being based in Austin. While I maintain that San Antonio would have been a better headquarters, Fort Worth is an important place as well.

As Davis’ campaign is analyzed by the Times, the paper interviews pertinent individuals who reflected upon her future candidacy. Matt Angle of the Lone Star Project, a Democratic activist grassroots force that has largely been historically impotent, offered somewhat obligatory commendable remarks vis-a-vis Davis’ candidacy. However, what surprised me more was the Times’ interview with Mark White, the former Democratic Governor. White, who is 73, stated:

“I think her chances are very good. I compare it to my chances of winning when I decided to run for governor. Everybody said it was impossible to do, and I was able to do it, and they’re probably telling her the same thing. She’s got the advantage that David had over Goliath.”

Davis, of course, was mum on the leaks. She will still be making her announcement on October 3rd, and will not be publicly saying anything before then. However, the announcement will be somewhat anticlimactic, like the faux-suspensful drama leading up to statements on the future candidacies of Greg Abbott, Brandon Creighton and Harvey Hildenbran before.

There is a lot to be said right now about whether or not Davis may actually win. I have discussed this issue at detail in the past, and I am sure I will do it again sometime soon. Loyal readers of Texpatriate know that my position is that, while Davis cannot win, she could come closer than any before, and set the stage for a victory down the line. Accordingly, I am very happy to see this announcement (though I had known this was coming for awhile).

I don’t really understand what is being debated here. The Trib reports that a House Panel was considering a bill by Senfronia Thompson, HB 2458, which “prohibits death sentences based on race-related evidence.” I didn’t know that that was legal under current law, and, to be honest, I doubt it ever was.

For the record, I’m not disputing that racism has a lot to do with who is sentenced to death, but the article is confusing as to what this bill actually entails. Here what I could figure out:

The bill would create a special appeal for death row inmates who had exhausted their other options. It would allow inmates to appeal if they believed that “race was a significant factor in the decision to seek or impose the [death] sentence.” In order to make this appeal, the defendant would be required to withdraw any objection they have to the penalty of life in prison without the possibility of parole.

This bill has some unlikely proponents. Mark White, the former Democratic Governor, and former mega-proponent of capital punishment, said that this bill is necessary because of the deep racial discrimination that has permeated Texas courtrooms.

Republicans, however, were tepid to the bill, which will most likely ensure its demise.